21st Century Scientific's Power Tilt System (PTS) can be installed on all BOUNDER models. With a power tilt system, the user can control the angle between the seat and the ground. The front of the seat tilts up from the normal driving position, and the seat and back move together. Usually the tilt can be adjusted over about a 45 degree range. The seat to back angle is fixed, usually at 94.5 degrees, though other seat-to-back angles can be custom ordered. The arms and front rigging move with the seat. Most styles of BOUNDER arms and front rigging can be installed on power tilt systems, including DIPLR dual independent power legrests or a power elevating footboard. The PTS gives the user added independence and improved seating comfort. Many users prefer a tilt system in combination with a power recliner, power seat elevator.

Available for users up to 1000 lb.
More information. 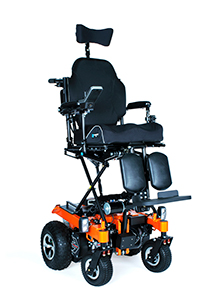 
| Send Email | Home Page | Search | About Us | Contact Info |
No pictures or graphics on this website may be used without permission of 21st Century Scientific, Inc.