21st Century Scientific's Sliding Back Power Recline System (SBPRS) can be installed on all BOUNDER models with weight capacities up to 600 lb. With SBPRS, the back slides downward as it reclines. This reduces the "shear" or pull on the user's clothing and skin. The result is a more comfortable reclining motion that reduces the necessity of repositioning. The ball bearing slide mechanism is configured for up to 3.5" of movement between the sliding back and the back frame.

21st Century Scientific's Power Recline System (PRS) can be installed on all BOUNDER models with weight capacities up to 1000 lb. With a power recliner, a user can adjust the back recline angle from nearly vertical to nearly horizontal, up to 80 degrees of recline depending on user weight. The PRS gives the owner added independence and improved seating comfort.

Toggle switch control or optional Through-The-Joystick control of the power recline is available. Can be combined with a Power Center Mount Footboard or Dual Independent Power Elevating Legrests (DIPLR). 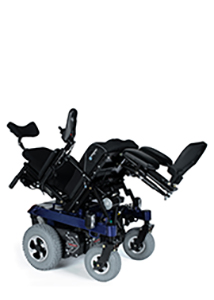 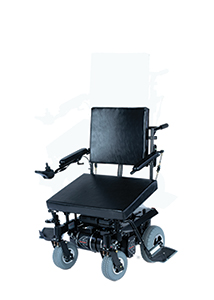 | Send Email | Home Page | Search | About Us | Contact Info |
No pictures or graphics on this website may be used without permission of 21st Century Scientific, Inc.